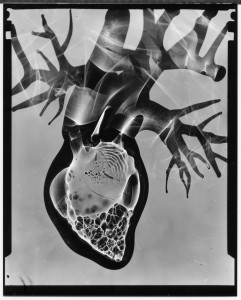 Peter Gemei learned photography from our Intro to Photo class in 2003 and has gradually been personalizing his approach to photography ever since. In the fall of 2007 Peter asked me to give him a tutorial in developing 4×5 black and white sheet film. I was anxious to see what he was shooting and was completely surprised to see what he produced.

Peter’s photographs are delicate images of hands, torsos, trees with roots, squids and human hearts. These are not photographs of reality taken with a camera or negatives modified with digital manipulation.  They are lines of pure light reflecting bright and dark on a grey  background. The images shimmer and crackle and flow reminding one of water or electricity, but nothing ever solid. While having a sense of the familiar in the outline of their shapes the delicate organic spasms of light inform the viewer that these objects can never be held. While they may remind one of x-rays, religious icons, schematic drawings or charms from a charm bracelet they are in fact empty vessels with an ethereal resonance whose meaning the viewer provides sub-conciously when viewing.  How did this all happen?

Peter has been a glass artist since leaving art school, primarily working with a torch to create his glass pieces. Considering photography a secondary medium he grew tired of photographing street scenes and decided to challenge himself in the darkroom for an upcoming show at the AS220 Project Space. When starting out Peter says ” it took awhile, I had no specific idea of where to go” He began to be interested in pure shadow and light. He became inspired the way light passed through his glass pieces and shown on the paper they were lying on. It reminded him of the beauty of X-Rays. This led him to the idea of making photographs without using a camera. In the dark he placed his glass pieces on an unexposed sheet of 4×5 black and white film. Through trial and error he exposed the glass and film for a fractions of a second. Each image was literally created in the dark with light passing through the glass piece and burning itself into the film. The result is pure shadow and light and unabashedly beautiful. 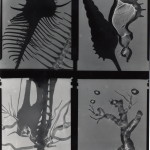